Home Culture Despite Black People Like Jim Brown, Most Who Are Offended By Kap Are White

Despite Black People Like Jim Brown, Most Who Are Offended By Kap Are White 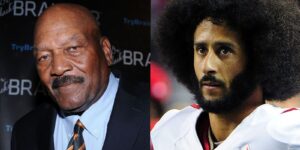 Jim Brown’s disagreement with Colin Kaepernick is surprising. The fact many white people disagree is expected.

By Rickey Hampton, Editor and Publisher of The African-American Athlete

Have you noticed the majority of the people who have a problem with Colin Kaepernick’s decision to protest the injustices of black people are white?
Now, let me be clear. It is perfectly fine for anyone, of any color, to disagree with Kaepernick. And, indeed, there are people in the black community who feel it was a bad idea. One such person, perplexing as it is to say, is NFL legend Jim Brown.

Brown is a man who once was on the front lines fighting for many of the injustices Kaepernick is protesting.
Amazingly, Brown accused Kaepernick of ‘desecrating’ the flag. I can’t tell you how much hearing Brown, one of my childhood heroes, disappoints me. It makes me wonder if Brown, who is 81 years-old, is well. He took a lot of hits during his career.

However, with people like Jim Brown aside, those who mostly find fault with Kaepernick are white.

Why is that, you may ask?

In the eyes of most of the black community, they are seeing precisely what Kaepernick is seeing.
Black folks have experienced generations of discrimination and unfair policies constructed specifically to hold black people, and poor people, back.

Again, you will certainly hear a few blacks who are critical of Kaepernick protest, and you will likely see them on Fox News. Hell, there were black folk that fought for the confederacy in the civil war. The black community is not a monolithic community. In fact, it is a very sophisticated community when it comes to politics and social issues.
And it should be noted that there are certainly whites who see the injustice in America, and perfectly understand why Kaepernick would protest. Look throughout the annals of times and you will find white people marching with

Martin Luther King, riding the freedom buses and even protesting confederate statues and messages of hate, like the late Heather Hyer, in Charlottesville.

As usual, the NFL has made the decision to ‘whiteball’ Kaepernick. There is no question that a mandate has come from the owners to not bring Kaepernick on a team.

That is why it is good to see so many people saying they are not going to watch the NFL this season. There are some who argue that boycotting the NFL doesn’t matter because they are going to make their money anyway. A $7 billion television contract guarantees that.

However, there are things more important than money. Tenets such as  dignity and self-respect is a couple of them. And for a lot of people who plan to not watch the NFL this season that is reason enough.