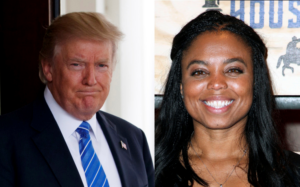 Jemele Hill’s claim that the guy who lives at 1600 Pennylvania Ave. is a ‘White Supremacist’ is not off base.

ESPN’s Jemele Hill has offered an apology  regarding her assertion ‘that man’ who currently (and hopefully temporarily) lives at 1600 Pennsylvania Ave. is a ‘White Supremacist.’

Of course, you know precisely who I am talking about.  I don’t even like saying his name, or writing his name, and I am damn sure not going to put the word ‘President’ in front of his name.

Hill has been reprimanded by ESPN, and the White House has gone as far as saying she should lose her job.  Hill is being forced to apologize, even though what  was said has merit, and is glaringly part of mainstream journalistic thought, discussion, and covers these days.

This man literally lied his way to the White House, starting with his outrageous racist accusations against former President Barack Obama.  You probably remember how he lied and lied and lied that Mr. Obama was born in Kenya. Just click here to read CNN’s account of his constant lying on the matter.

Remember when he announced his candidacy by calling Mexicans rapists?   Later, he said U.S. District Judge Gonzalo Curiel, who is actually an American citizen, would be biased against him because he is ‘Mexican American’.

Do you recall his insulting out-reach to the black community? “You’re living in poverty, your schools are no good, you have no jobs, 58% of your youth is unemployed — what the hell do you have to lose?”

And now, his feelings are hurt because  Hill told the truth about him. Hill tweeted that:

She didn’t say everyone who supports him is racist, but there is no question a segment of his base is racist.  Please consider that heads of white nationalist organizations and the KKK have shown their support of that man. What is even more disgusting than the character of this man is how so many people, supposedly good people, supposedly God fearing people, turned their heads and made excuses for his racism, his lies, his innuendoes, and his misogyny. Ms. Hill was forced to make an apology. But there are many who will agree that what she said was true.