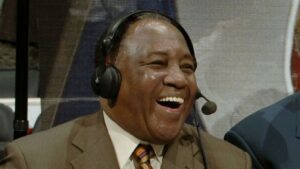 Sad to report the passing of Steve ‘Snapper’ Jones, the former ABA All-Star, who was well known during the ’90s for his work as an NBA color commentator for NBC.  Jones, who had been battling a long illness, was 75.

Jones, a 6-foot-5 guard, was  a three-time All-Star in eight ABA seasons. He averaged 16.0 points per game while playing for  Oakland, New Orleans, Memphis, Dallas, Carolina, Denver and St. Louis. He played his final season in the NBA Portland.

Following his retirement Jones went into the broadcast booth as a color analyst for the Trailblazers. He became a fixture doing national NBA games with his sidekick Bill Walton. Their back and forth banter provided valuable insight and extra entertainment to the games.