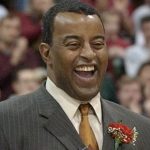 Bantom, a native of Philadelphia, discussed his career from his playing days at St. Joseph University, to the famous 1972 Olympics, where he was a member of the USA basketball team that was cheated out of a Gold medal by Russia. The USA team has yet to accept the Silver medal.

Bantom, was the No. 8 overall pick in the 1973 NBA draft by Phoenix, and went on to play nine years in the NBA, and six years overseas, before transitioning into the NBA corporate offices.