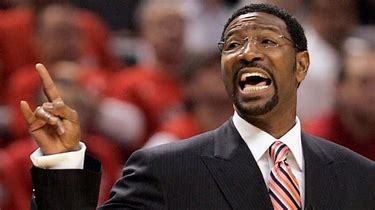 Current University of Memphis assistant coach Sam Mitchell, who played 13 seasons in the NBA _ and later coached the Toronto Raptors and Minnesota Timberwolves _ will be the guest on ‘Express Yourself with T-Ramone and ‘Sco’, hosted by veteran sports writers Tim Turner and Roscoe Nance, Wednesday at 8 p.m. EST.

Mitchell, 55, played collegiately at Mercer University and was a third-round draft pick of the Houston Rockets in 1985.

However, Mitchell bounced around in the CBA until 1989 when he signed with the Timberwolves. He would play 10 of his 13 seasons in the NBA with the T-Wolves (three in Indianapolis 1992-95). He retired in the ’02.

After his playing days, Mitchell went into coaching as an assistant coach in Milwaukee. In 2004 he was named the head coach of the Raptors and coached there until 2009. He later served as the interim coach of the T-Wolves during the 2015-16 season.  Call in with your questions and comments at 929-477-1209. The online link is:http://tobtr.com/s/11273357.