Deprecated: The called constructor method for WP_Widget class in WPAC_Nav_Menu_Widget is deprecated since version 4.3.0! Use __construct() instead. in /var/www/wp-includes/functions.php on line 5472
 Get Ready For A Championship Ride With Zeke And Dak - The African American Athlete 
Notice: Undefined offset: 1 in /var/www/wp-content/themes/jnews/class/ContentTag.php on line 86

Get Ready For A Championship Ride With Zeke And Dak


By Maury Jackson, for The African-American Athlete

For a lot of NFL fans, Sunday’s Super Bowl LI  between the No.1 seed New England Patriots, and the No.2 seed Atlanta Falcons from the NFC is not the game they wanted to see.

With all due respect to the Falcons, who earned their way to the big game behind a prolific offensive attack, it was the No.1 seeded Dallas Cowboys that millions of fans wanted to see.

After years of mediocrity, the Cowboys put on a tremendous show all season only to come up short to Aaron Rodgers’ Green Bay Packers.

It’s clear the Cowboys made headlines not only for their team play, but the play of their extraordinary rookies: quarterback Dak Prescott and running back Ezekiel Elliott. 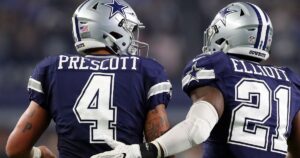 Despite being ousted by the Packers in the Divisional round, there’s no reason to not appreciate the  Cowboys’ season. Their sparkling 13-3 record was no fluke, and their future seems to be bright. Of course, that comes even though there is no assurance of continuous success in the National Football League.

For many young players, the hardest thing to do is not fall victim to the sophomore slump. God forbid injury, one can only hope that both Prescott and Elliot continue performing at an elite level next year. And there is no reason to think they won’t.

Their talent and ability to play in the clutch is one thing that stands out about both athletes. Those qualities have made them formidable, and the team to beat in the East for maybe the next decade.

Dak had a magnificent rookie season, going for almost 3,700 yards with 23, and a measly 4 INTs. Elliott led the league in rushing with 1,631 yards and had 15 TDs.  Even in a down-year for Pro-Bowl wide receiver Dez Bryant, Dak still proved to be efficient and reliable in the passing game. He can make plays with his legs, and he takes care of the football.

The way Elliott took over games was like no other back in the league.  Prescott, Elliott, and Bryant combined with a powerful offensive line is  reminiscent of America’s team with Troy Aikman, Michael Irvin, and Emmitt Smith.

Prescott and Elliott were considered MVP candidates throughout the season, and but even more importantly they are the catalysts of the rebirth of the Dallas Cowboys franchise.

With their last conference championship being in 1995, many hoped and believed they would make it to the promise land. Not only would the NFC have to play at JerryWorld throughout the playoffs, but everyone would be front and center to watch their every down.

Now, this is not to say that a Patriots-Falcons Super Bowl won’t be an entertaining game. However, let’s face it, we’ve seen this story before. Two prototypical quarterbacks lead their teams to the Super Bowl, and only the better team will win.

Imagine if the Cowboys were in the Super Bowl? Imagine the spike in ratings, television promotions, and everything surrounding the NFL? Imagine the strong support of die-hard Cowboys fans interacting with NFL fans who can’t stand the Cowboys?

Whether you like drama or not, there is no mistake that the Cowboys in the Super Bowl would have been much more than a football game, with all the drama that comes with Jerry World, and with all the drama surrounding Tony Romo, and the two young stars.

For now, let’s’ appreciate the season they had and look forward to the numerous playoff opportunities the Cowboys should have in the near future

Could Their Be A 'Black Pat' Revolution In New England?