The ‘Hawk’: Hoops Icon And Hall Of Famer Connie Hawkins Dies At 75 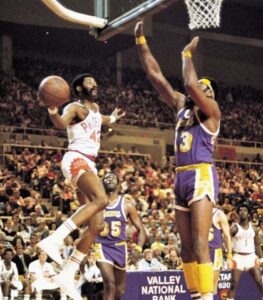 Connie Hawkins takes it to the hoop against Wilt Chamberlain.

A basketball icon has left us. The great Connie Hawkins passed away at the age of 75 on Friday.

Throughout the 60s and early 70s the ‘Hawk’ was one of basketball’s most spectacular players. Standing 6-foot-8, and with a wing span of a 7-footer, and hands that were so big, the basketball seemed like a softball, Hawkins soared above opponents.

He was the forerunner of the high flyers Julius Erving, Michael Jordan and Dominique Wilkens.

A native of Brooklyn, Hawkins was a playground and high school legend, before heading to the University of Iowa in 1960.

It is at Iowa where controversy entered his life, and would impact his career. Hawkins  was expelled from the University of Iowa after his freshman year in 1961 for his alleged involvement with gamblers in a point-shaving scheme. Not only could he not play collegiately, he was banned from the NBA,  as well. The league wanted nothing to do with someone who was involved with point shaving, even if there was absolutely no evidence whatsoever connecting Hawkins.

Hawkins would become a basketball vagabond. He played with the Harlem Globetrotters two years, and the old American Basketball League, where he was the league’s MVP. In 1967 Hawkins joined the Pittsburgh Pipers of the ABA, and promptly led them to the ABA title. In two seasons in the ABA he averaged 28 points and 12 rebounds per game.

Hawkins  always maintained his innocence, and he was finally exonerated from the gambling allegations by the start of the 1969 NBA season. He signed with the Phoenix Suns at the age of 27, and finally got the  chance to show his skills at the highest level. He did not disappoint. Hawkins averaged 24.6 point per game, and would become a four-time all-star during his stay in Phoenix.

As good as Hawkins was, the NBA did not see him in the prime of his career. His career numbers (16 points, eight rebounds) do not jump off the stat sheet over the course of his eight-years in the NBA, but there was never a question of his abilities.

In 1992 Hawkins’ career was finally given its just due when he was inducted into the basketball hall of fame. Here are clips of the ‘Hawk’ in action.