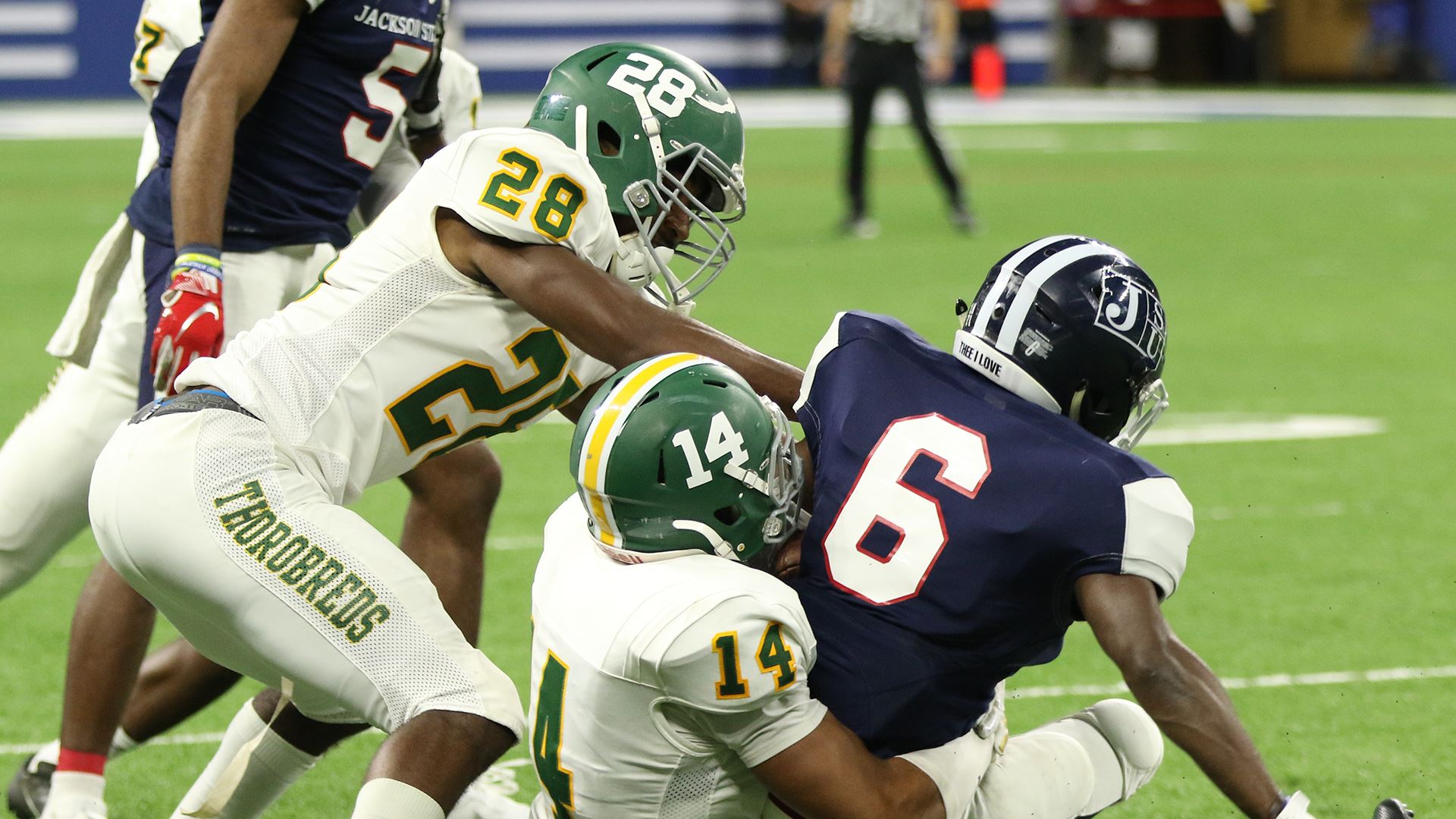 When Jackson State faced Kentucky State in the Circle City Classic Saturday, Tigers fans might have flashed back to some 40 years ago. That’s when Jackson State, running the Wishbone triple-option offense featuring 1,000-yard rushers Jeff Moore and Perry Harrington, was running roughshod over opponents.

But unlike 40 years ago, it was Kentucky State that was running the triple option and running roughshod.

The Thorobreds gouged Jackson State for 353 yards on the ground, averaging 7.4 yards a carry, in a 33-25 upset victory at Lucas Oil Field. It was the Division II program’s second victory of the season against an FCS school. The Thorobreds opened the season with a 13-7 victory against Robert Morris of the Northeast Conference.

Redshirt sophomore quarterback Jaylen Myers triggered Kentucky State’s running game with 92 yards on 13. Myers only completed one of three pass attempts, but that went for 31 yards and a touchdown that put the Thorobreds (2-1) ahead 13-10. The Thorobreds responded with 33 unanswered points to take control of the game.

Jackson State (1-3) bolted to a 10-0 first-quarter lead on quarterback Derrick Ponder’s 13-yard pass to Kennen Young and Adrian Salazar’s 21-yard field goal. From that point, Kentucky State took command with its running game – the Thorobreds had possession of the ball for almost 34 minutes in the contest and ran 25 more plays than Jackson State – before the Tigers scored 15 points in the fourth quarter to make the score respectable.

Ponder threw for a career-best 279 yards and three touchdowns for Jackson State, but that wasn’t nearly enough to match Kentucky State’s ground game.

Prairie View A&M 42, Grambling State 36 – Coach Eric Dooley made it two straight victories against his former boss, Broderick Fobbs, as the Panthers defeated the G-Men in the State Fair Classic at the Cotton Bowl in Dallas.

Dooley was Grambling’s offensive coordinator for four seasons from 2014-17 and helped the G-Men win three consecutive SWAC West Division championships before taking over at Prairie View.

Dooley and the Panthers (2-3, 1-1 SWAC), the preseason pick to challenge Southern for the West crown this season, may well have knocked Grambling out of championship contention. The G-Men (0-4, 0-2 SWAC) are winless for the season. Running back Dawonya Tucker destroyed Grambling’s defense, running for 263 yards and two touchdowns on 26 carries. Quarterback Jalen Morton backed up Tuckers with 128 yards on the ground while throwing for 192 yards and a touchdown.

The Panthers finished the game with 607 yards total offense. Grambling was able to stay close to the Panthers most of the contest and led 23-17 in the second quarter. But the G-Men were unable to keep pace with Prairie View’s high-powered offense over the long haul, and the Panthers surged to an insurmountable 42-29 lead with 5:23 remaining in the game. Grambling’s final points came when Quincy Mitchell returned a blocked punt 55 yards for a touchdown with 1:25 left. The G-Men couldn’t recover an onside kick following the score, and the Panthers ran out the clock for the win.

Virginia Union 16, Winston-Salem State 15 – The Panthers eeked out a home CIAA victory when Jefferson Souza kicked a 25-yard field goal with 21 seconds left in the game. Souza’s kick, his third field goal of the day from that distance, came after Jarrett Sumiel blocked a Winston-Salem punt with 1:52 remaining and recovered the ball at the Rams’ 19-yard line.

Virginia Union fell behind 9-0 in the first quarter and trailed most of the game. The Panthers took a 10-9 lead in the third quarter when Souza connected on a 25-yard field goal. But Winston-Salem regained the lead, 15-10, early in the fourth quarter on Farrell Murchison’s one-yard touchdown run.

Virginia Union cut into the lead when Souza converted his second field goal with 12:01 left. The game featured a duel between running backs Tabyus Taylor of Virginia Union and Quarderman Sloane for Winston-Salem. Sloane finished with 100 yards on 15 carries; Taylor gained 76 yards on 22 carries.

North Carolina A&T 37, Delaware State 0 – Junior running back Jah-Maine Martin continued to run roughshod over Aggies as opponents as he rushed for 108 yards and four touchdowns Thursday night in a home MEAC victory.

Ja’Rome Johnson, QB, Bowie State – Completed 19 of 29 passes for 307 yards and four TDs in his first career start in a 54-6 win against Saint Augustine’s.

AkeviousWilliams, QB, Bethune-Cookman – Had 300 yards total offense – 199 passing while completing 16 of 23 passes and 101 yards rushing – and accounted for three rushing TDs in a 37-29 win against Howard.

Tren’Davian Dickson, WR, Texas Southern – Caught four passes for 112 yards and on TD in a 68-31 loss to Houston Baptist.