Home Featured Hey, You Ignorant Stooges; LeBron James Can Buy You, And Your Momma

Hey, You Ignorant Stooges; LeBron James Can Buy You, And Your Momma 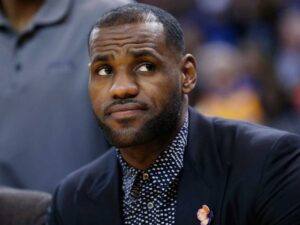 You know what they call a rich black man when he leaves a room full of white people?

NBA superstar LeBron James felt that today. According to reports, his Los Angeles home was vandalized. The intruders wrote the word ‘nigger’ on his home.

No matter how high the ascendance of the numerous unparalleled black achievers in America, there is a segment of white America always feeling that their whiteness should trump all hard earned successes in life.  For this segment of white America their inadequacies overwhelm their self control and common sense, prompting acts of hatred like trashing James’ home.

I assure you, no one in the black community is surprised by this. I mean, if they feel the need to call President Obama a nigger, what is it to call a basketball star a nigger?

I wish I could be content say this is a product of the man who now lives at 1600 Pennsylvania Ave. (By the way, you won’t hear the word President and that man’s name ever uttered together by me. I refuse to acknowledge his racist, misogynistic rhetoric as representing the leader of this nation that my ancestors fought and died for.)

Unfortunately in truth, the attitude that motivated the intruders to vandalize James’ home has always been here. Leader forty-five was simply devious enough to take advantage of it. (And I use the word ‘simply’, advisedly here)

What these racists need to know is this is a new day. They can keep deluding themselves  that all black people are living in squallier, hopelessness, and have nothing to lose. I assume  that makes them feel better as they gaze around at their own lack of accomplishments.

What those racists do not seem to understand is writing nigger on LeBron James’ house isn’t going to stop him from being one of the most important, and successful, athletes of the 21st century.  He will be remembered. James spoke about the incident matter-of-factly to the media.

“…It  just goes to show that racism will always be a part of the world, a part of America,” said James, speaking at the NBA Finals’ media day on Wednesday. “And, you know, hate in America, especially for African Americans, is living every day. And even though that it’s concealed most of the time, even though people hide their faces and will say things about you and when they see you they smile in your face, it’s a life every single day.

“And I think back to Emmett Till’s mom, actually,” he added. “It’s kind of one of the first things I thought of, and the reason that she had an open casket is because she wanted to show the world what her son went through as far as a hate crime and being black in America.

The cowardly henchman who vandalized James’ home should know that black folk are on the move.  It is occurring in every field of human endeavor.  Maybe they observed in the recent weeks as America’s 106 Historically Black College and Universities graduated the next generation of potential leaders. Oh, and let’s not forget those black scholars who graduated from mainstream universities, and the various medical schools and law schools.

Barack Obama was the first black president, but he won’t be the only black president. In addition, he was neither the first, nor the last black man to achieve beyond the dreams, or imaginations of those thugs.

I am sure those vandals feel good about desecrating James’ home. Of course, that only shows how pitiful and feeble their minds are.

But here is a dose of reality for those hoodlums  to remember.  The guy you called a nigger  got enough money to buy you, your momma, and your daddy’s, daddy.

Perhaps, you ignorant minions, your energy would have been better spent working to figure out how elevate yourself to one quarter of the success of James, and the thousands of other blacks running circles around your sad, impotent lives.