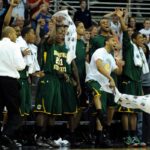 Members of the Norfolk State University basketball team celebrate their stunning win over No. 2 seed Missouri in 2012.

Perhaps it’s only fitting that this year’s Final Four is set in San Antonio. The city is not only the site of the NCAA men’s basketball championship, it is also the site of The Alamo — the place where the Mexican Army slaughtered a garrison from Texas in a battle for independence from Mexico. The Alamo serves as both a metaphor for how Historically Black College and Universities fare in this tournament and a massive truism. It hasn’t been pretty.

Once again, the HBCU teams begin their quest in the usual location — Dayton, Ohio — among the eight teams playing in what the NCAA now charitably calls “The First Four.” It’s a marketing thing because we all know it’s a play-in game, one that presumptive National Invitational Tournament-bound and Last Four teams Baylor, Notre Dame, Saint Mary’s and Southern California, would kill to, well, play in.

The selection committee halved the chances of the HCBUs individually advancing past this pre-tourney — call it the Don’t Hate Eight — when it pitted Texas Southern (Southwestern Athletic Conference Champions) against North Carolina Central (champs of the Mideastern Athletic Conference) Wednesday night. The winner takes a breath for a day before taking on Xavier, No. 1 seed in the West Region, in Nashville (which is west of Knoxville and not much else).

Thank goodness Trae Young-hyped Oklahoma made the tournament. Otherwise, those teams that just missed the tournament would be salty about the ones going to Dayton — especially the HBCUs — given their horrific history. And really can you blame them?

Since they started having Don’t Hate Eight games, SWAC and MEAC teams have played in 16 of 17 (including this year), winning only four times. Their season usually ends when they make it to the first round — the On The Floor 64 — because they have been essentially a walkover to the second round for a No. 1.

But there have been those occasional upsets — to advance into the Whew 32 — when seeded higher than No. 16. Like in 1993 when No. 13 Southern shocked the world by taking out No. 4 Georgia Tech. The Jags’ seed was the highest ever for an HBCU, and represented the last time a SWAC team has won a game in the real tourney.

Then there were three times No. 15 teams — all from the MEAC — made first-round noise. In 2012 Norfolk State University upset Missouri, the last time the conference won in the real tourney. In 2001, Hampton shocked Iowa State. And in 1997, Coppin State took out South Carolina. All three wins were huge considering a No. 15 beating a No. 2 has happened only eight times. Ever.

Those four sweet, aromatic wins can’t mask the odious funk wafting off HBCU’s collective tournament record. If we’re keeping record (and we are), HBCUs are 8-63. Of that, the MEAC is 6-32 and the SWAC is 2-31.

On the face of it, these games look like fool’s errands for those who are not playing. For those with an opportunity to play Wednesday and possibly Friday, it is a chance to compete against the very best.

It’s why they even lace up sneakers all season and put in the work to get to this point. The odds of them seeing the sights of San Antonio other than as a tourist are slim.

However, the odds of them making a lifetime of memories Wednesday and Friday are large. As large as the tales they will tell their kids and grandkids about in the years to come. And for them, that’s what it’s all about.