Why Nancy ‘Aunt Jemima’ Green Is Not Like Jerry Rice

By Rickey Hampton, For The  African-American Athlete

You may have never heard of Nancy Green, but you are certainly familiar with a product Ms. Green helped make famous.

Green portrayed  the role of Aunt Jemima. She was the big, black, woman in the plaid dress and hair scarf, who as cook/servant/nanny made the most ‘Dee-licious’ pancakes ever. In her role, Aunt Jemima embodied all the stereotypes of black people: A toothy smile, red lips and jet black skin, and a verb breaking vocabulary. 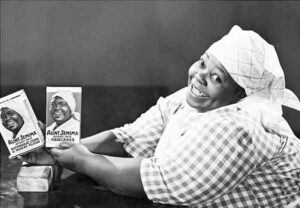 Green’s popularity was so significant that Pearl Milling Company changed its name to The Aunt Jemima Manufacturing Company.

However, it should be noted that Green used her notoriety to fight against poverty, and work for equal rights in Chicago, where she lived.

It is perfectly understandable why Green would take on then exploit that job as Aunt Jemima in 1893. There were so few opportunities for black women to gain the wealth and notoriety that Green enjoyed.

Now, this is 2017, and I don’t know what the hell NFL legend Jerry Rice was thinking when he decided to go all ‘Chicken George’ for Popeye’s Chicken.

For some reason, Rice thought a picture of him in a Popeye’s football helmet, with a fried chicken leg as a face guard, would be a good look.

Seriously, did Rice look in the mirror with that helmet on? How could he say “Oh, yeah, this will work! Rice’s decision to put that thing on his head is regrettable, if not for him, for many in the black community.

Rice is a football icon. He is arguably the greatest player in the history of the sport. He shouldn’t have to lower himself to get endorsements.

Then again, maybe it wasn’t an issue to Rice. (After all, he put the damn thing on his head.)

Back in the fall Rice was critical of 49ers’  quarterback Colin Kaepernick for his decision to protest and ‘disrespect’ the American flag. Well, I am asking Rice not to disrespect the legacy of black folk. Please, brother, take that thing off your head.

(Rickey Hampton Sr. is the founder and editor of The African-American Athlete)