Home Featured NFL Draft: A Litany Of Stereotypes (Literally) In Black And White

NFL Draft: A Litany Of Stereotypes (Literally) In Black And White 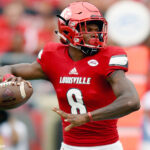 Heisman Trophy winner Lamar Jackson of Louisville is dealing with the stereotype of ‘the black quarterback’ that’s been around for years.

Listening to the radio Saturday before Georgia’s spring practice game one of the talking heads was discussing the Bulldogs’ significant losses of supremely talented linebackers to this year’s NFL draft.

Everything was fine until he talked about the inside linebacker position. He said when he considers that position, he’s thinking of guys like Brian Urlacher and Keith Brooking playing that position, “guys who were more stiff,” is how he put it.

His statement was worded carefully, but executed with a ham-hand, as with most things relative to race in America. Nowhere in sports does the dance around race rear its head more frequently than talent evaluation, and explaining of the relative abilities of black and white players.

So as the NFL Draft is upon us Thursday and Friday, it will be amusing to see how players are described and guessing which race the player is.

When talking about white players, words most often associated with them are coachable, a coach on the field, intangibles, intelligent, spunky, upside, leadership, tough, heart, quick (as opposed to fast) and — an all-time favorite — gritty.

The pattern here is the descriptors are all tangentially connected to excellent work ethic and superior thinking ability. As if whatever these are is because of transcendent effort, and that they somehow earned the right to be drafted.

It is as if those players are considered to be a better risk.

By contrast, the oldies but goodies for black players are athletic, natural, strong, great frame, versatile, explosive, gifted, aggressive, inconsistent and the old standby — especially for HBCU players, if drafted at all is the worst one of all — raw.

It’s worse because these terms not only demean black players, it depresses their earning potential. Would you draft, and pay, top dollar on guys with those attributes associated with them? They would like for you to think those attributes reflect hardly any effort whatsoever on the part of the black athlete.

Those scouting reports and talking heads are written by those radio yammerers that say things as if these athletes fell out of bed with their respective skills. It is if these athletes came from the womb making one-handed catches and beating offensive linemen with swim moves.

What’s more, their stereotypes are taking money out of these kids’ pockets. On whom do you think teams most likely to take a chance: The gritty coach on the field, who doesn’t have the speed, but he makes up for it with heart and determination? Or, do you prefer the naturally athletic, but inconsistent athlete who is raw?

“Man, that’s all you hear about us,” Doug Williams said a few years back. “Everybody (from HCBUs) is raw. They say that because they try to get us for a Coca-Cola and a Moon Pie. That is a slap at the kid and their coaches. And it’s wrong.”

And it hasn’t changed in decades given that Williams’ quote is from a story written 30 years ago. That’s a lot of HBCU steak tartare.

So, during the draft, make it interesting for yourselves when you plop down in front of your TV at home.

Why not list the above words, and others you come up with to describe players and keep them handy. Then get your favorite beverage beside you. Take a swig for each time the attributes are mentioned for black players and do three squats each time they are said for white players.

Chances are you will more likely be tipsy (for those who imbibe), or have a screaming bladder by the end of the third round than you will have firmer glutes, quads, and calves.

And it will also help dissipate that anger from watching how Lamar Jackson is spoken of, versus the other QBs in the first round.