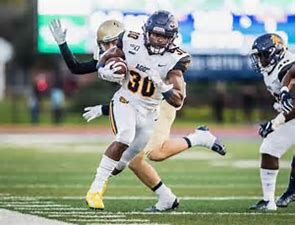 By Roscoe Nance,  For TheAfricanAmericanAthlete.com

Paul Brown, the Pro Football Hall of Fame coach of the Cleveland Browns had a simple philosophy when Jim Brown, arguably the greatest running back in NFL history, was on his team.

Brown, who also doubled as the owner of the Browns, often said, “If you have a big gun shoot it.’’ North Carolina A&T State coach Sam Washington heeded Brown’s words Saturday in the Aggies’ 27-21 come-from-behind non-conference road victory against Charleston Southern.

Washington took dead aim at the Buccaneers’ defense with running back Jah-Maine Martin.

The 5-10, 203-pound redshirt junior rambled for a career-high 299 yards – the third-best single-game total in school history – and two touchdowns on 25 carries as the Aggies gained 292 net yards on the ground.

Only Maurice Hicks’ games of 437 yards against Morgan State in 2001 and 353 against South Carolina State in 2000 surpass Martin’s output against Charleston Southern.

“Our running backs coach (Shawn Gibbs) always tells us that running backs have to be the spark plugs of the offense,” said Martin. “I put that in my head and said, ‘Hey it’s time to go for it.’”

Martin’s first touchdown came on an 84-yard gallop that cut Charleston Southern’s lead to 14-12 after the Buccaneers had built a 14-0 second-quarter advantage. Martin sprinted 76 yards to the end zone to give the Aggies a 27-14 lead and put the game out of reach with 5:27 left in the fourth quarter after Ruiz booted a pair of field goals that put North Carolina A&T ahead 20-14.

The two-time defending MEAC and Black College National Champions spotted Charleston Southern (0-3) a two-touchdown lead as the Buccaneers scored on a pair of long touchdown drives.

The first score came on a 33-yard touchdown pass from Jack Chambers to Kameron Brown with two minutes remaining in the first period. The score capped a six-play, 84-yard drive that consumed two minutes, 34 seconds.

The Aggies (2-1) appeared to be on the brink of losing for the second consecutive week when Charleston Southern drove 65 yards in eight plays to take a 14-0 lead with less than three gone in the second period. This time Chambers scored on a one-yard run.

North Carolina A&T came to life midway through the second period. Martin gave the Aggies a much-needed spark when he broke loose for a 30-yard gain for a first down at Charleston Southern’s 12.

The Aggies were unable to punch the ball into the end zone, but Noel Ruiz got them on the scoreboard with a 31-yard field goal at the 5:56 mark. Ruiz added a 44-yard field goal as time expired in the second quarter to make the score 14-6.

Jackson State 49, Tennessee State 44 – The Tigers relied on a punishing running attack to end a six-game losing streak to their rivals from Tennessee in the 30th Southern Heritage Classic in Memphis. Jackson State (1-2) ran for 338 yards while ringing up its highest point total ever in the series. The 49 points were the most for Jackson State in a win since its 59-0 victory against Virginia-Lynchburg in 2014. Jordan Johnson rushed for 141 yards for Jackson State and was voted the game’s MVP. Tyson Alexander ran for 87 yards and a touchdown and Keshwan Harper added 71. Backup quarterback Cameron Rosendahl came off the bench in relief of Octavius Battle and threw for 384 yards and three touchdowns for Tennessee State (1-2). Steven Newbold had 10 catches for 196 yards and two touchdowns. Chris Rowland had a 96-yard kickoff return for the Big Blue that tied the score at 7-all in the first quarter. But Jackson State ran off 21 straight points. The lead grew to 42-23 before Tennessee State scored 21 fourth-quarter points to make the final margin respectable.

Hampton 41, Howard 20 – Florida State transfer quarterback Deondre Francois passed the Pirates to victory as these former MEAC rivals renewed hostilities in the 22nd Chicago Football Classic at Soldier Field. Francois threw for 217 yards and four touchdowns to earn Offensive MVP honors in the first meeting since Hampton (2-1) left the MEAC for the Big South Conference before the 2018 season. Hampton has won seven of the last 11 matchups and has a four-game winning streak in the series. Francois had touchdown passes of 70 yards to Darran Butts, 68 and five yards to Jadakis Bonds, and five yards to KeyRon Catlett. Butts set up Francois’ five-yard touchdown pass to Bonds with a 90-yard kickoff return. Hampton’s defense harassed Howard quarterback Caylin Newton throughout the game. The Pirates intercepted the reigning MEAC Offensive Player of the Year and the preseason pick to win the award again this season twice and sacked him four as the Bison (0-3) remained winless.

Arkansas-Pine Bluff 53, Langston 15 – The Golden Lions matched their win total of last season in their third contest as they rolled to a lopsided home victory. Quarterback Skyler Perry completed seven of nine passes for 189 yards and touchdowns while guiding Arkansas-Pine Bluff (2-1) to back-to-back victories for the first time since 2014. The Golden Lions upset Alabama A&M in Week 2. Wide receiver Harry Ballard had five catches for 147 yards and two touchdowns. Backup quarterback Shannon Patrick completed nine of 12 passes for 135 yards and a touchdown.

Deshaun Wethington, RB, Chowan – Ran for 194 yards and two TDs in a 70-16 win against Alderson Broaddus.

Manasseh Bailey, WR, Morgan State – Caught four passes for 172 yards and one TD in a 63-12 loss to James Madison.

Taurean Taylor, RB, Tuskegee – Ran for 160 yards and one TD in a 13-7 win against Kentucky State.

Darius Hagan, RB, Virginia State – Ran for 134 yards and one TD in a 35-16 win against North Carolina Pembroke.

D’Angelo Durham, RB, Savannah State — Ran for 125 yards and two TDs in a 60-21 win against Virginia-Lynchburg.

Miles Broadnax, RB, Savannah State – Ran for 100 yards in a 60-21 win against Virginia-Lynchburg.

De’Mo Burroughs, WR, South Carolina State – Caught six passes for 108 yards and one TD in a 55-16 loss to South Florida.

David Manigo, WR, Florida A&M – Caught seven passes for 100 yards and one TD in a 57-20 win against Fort Valley State.

Keenan Blake, KR, Delaware State – Returned three punts for 88 yards, including a 57-yard touchdown return, and one kickoff for 61 yards in a 55-12 win against Lincoln (Pa.).