Remember Who Hank Williams Jr. Reps If You Watch MNF 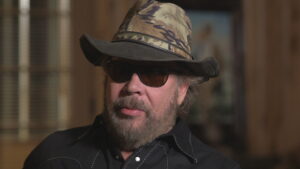 Hank Williams Jr. is back singing the opening to MNF.

For those of you are choosing to watch the National Football League, just to remind you that if you watch the opening of tonight’s Monday Night Football on ESPN, that you will be watching a racist, Hank Williams Jr., open the show.

Out of all of the musicians in the world to choose from, how in the hell did ESPN think it would be a good idea to bring back a bigot and homophobe to sing the opening to its signature Monday Night Football series?
You may remember that in 2011 Williams _ famous for his “Are You Ready For Some Football” opening _ lost his job as the musical performer for the opening of MNF because of his attacks on President Barack Obama.
He compared Mr. Obama to Hitler during an interview on … you will be stunned by this: Fox and Friends.
Williams said a golf outing between then former House Speaker John Boehner and Mr. Obama was like “Hitler playing golf with [Israeli Prime Minister Benjamin] Netanyahu.”

It was simply ignorant, tasteless, and tacky. Folks let ESPN know about it, too.
The backlash cost Williams his job. There were arguments about his civil rights being violated. But his civil rights were never compromised. He was free to make a bigoted statement, and ESPN was free to no longer require his services.

Now, the hiatus is over. Williams is back.

And apparently, ESPN knows that some of you just won’t give a damn.
Consider what Stephanie Druley, the ESPN senior VP of events and studio production, told the Tennessean newspaper: “I’m sure there’ll be some [criticism], but I’m not concerned. It was the right time. We discussed it internally, and it was just the right time to bring him back.

“I think it’s a return to our past in that it’s such an iconic song associated with football.”
A time to what past, 1950? Why not hire another racist, Ted Nugent, to play backup? He will feel right at home with the bigotry of Williams.

Does ESPN not know about this man? He is a racist and a homophobe. Check out the review of one of his concerts by the Dallas Observer.

It is important remember that Williams would not be back at ESPN without the blessing of the NFL. Meanwhile, former San Francisco 49ers quarterback Colin Kaepernick is still without a team.
So, apparently, it is OK for someone to disrespect the President of the United States, mock blacks, and attack the gay community. However, if you take a knee during the playing of the national anthem, that’s a problem.

The hiring of Williams, and the rejection of Kaepernick, clearly illustrates how the National Football League feels about a certain segment of its players and fan base.
Just thought you should know if you are watching MNF.