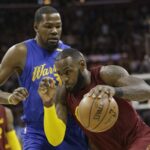 LeBron James and Kevin Durant are among a generation of athletes who won’t shut up.

When Laura Ingraham attempted to silence African-American athletes with a flaccid, “shut up and dribble” burn, she learned a couple of valuable lessons. One, outside the right-wing extremist echo chamber, no one knows who the heck she is. And two, her admonition is no match for increasingly socially-conscious athletes.

Ingraham, who ladles healthy doses of right wing, Donald Trump-slurping bilge on her radio show and on Fox News Channel, took to the airwaves of her TV gig to admonish LeBron James and Kevin Durant for daring to voice their political opinions. On her show Thursday night, she said this:

“Must they run their mouths like that? Unfortunately, a lot of kids — and some adults — take these ignorant comments seriously. And it’s always unwise to seek political advice from someone who gets paid a hundred million dollars a year to bounce a ball. Oh, and LeBron and Kevin: You’re great players, but no one voted for you. … So, keep the political commentary to yourself or, as someone once said, shut up and dribble.”

That’s rich. The only thing separating Trump, a reality TV celebrity and celebrity athletes is the Electoral College.

Oh, we get it, Ingraham and radical right’s antipathy toward some athletes. The naked resentmentthey have toward athletes who dare using their platforms to espouse views contrary to theirs.So what she said was predictable given that Trump has called them “sons of bitches” for kneeling to protest social inequities, and he’s come for athletes who want no part of White House championship celebrations including him. Her mistake was somehow thinking it was OK for her to tell grown-assed men she doesn’t know personally to shut up and do anything.

Granted, as a media person who voraciously reads and listens to an array of opinions, I got her “shut up and dribble” jab immediately because she’s been whoring variations on that phrase since it was one of her book titles seemingly a lifetime ago. And since a statement was needed to explain what the phrase meant, and to essentially take the heat off her, perhaps it’s time to retire it.

“There was no racial intent in my remarks – false, defamatory charges of racism are a transparent attempt to immunize entertainment and sports elites from scrutiny and criticism,” Ingraham said in the statement. To be fair, to draw such conclusions about Ingraham’s comments may not be true but are not a stretch. Especially given that they’re commonly in response to opinions by African-American athletes whose perspective are counter to hers.

Haven’t heard her tell J.J. Watt to shut up and tackle for using his platform to raise $37 million toward Hurricane Harvey relief efforts. Which is probably a good thing because she’d look like an idiot whining about an initiative that earned Watt the NFL’s Walter Payton Man of the Year award.

And you haven’t heard her tell Pistons’ coach Stan Van Gundy to shut up and coach when he called Trump “Brazenly racist”, or Warriors’ coach Steve Kerr when he said of Trump, “we’re faced with the reality of, the man that’s going to lead you has routinely used racist, misogynist, insulting words.”

Crickets, and you can’t miss the common thread in all three instances.

What she and the right refuse to accept is wealthy athletes don’t have to surrender their passport upon signing their professional contracts. They’re still U.S. Citizens. They still care about the conditions that plague this nation. They still don’t know/care who you are.

And they’re going to keep on talking about those things important to them. Shut up indeed.

“I also wish she would have did a little bit more fact-checking,” James added. “Because I actually did finish high school and didn’t leave early. I graduated high school.”