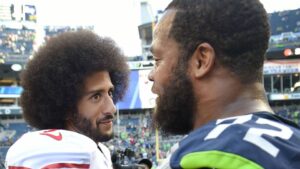 Seattle’s Michael Bennett says nothing can move forward until a conversation takes place about Colin Kaepernick not playing.

Seattle Seahawks’ defensive end Michael Bennett was so on point with his recent comment regarding the so-called flag controversy.  If the NFL thinks it is going to be able to just wait this issue out, without engaging in serious conversation, it is wrong.  Bennett’s comments come after the NFL and the NFL Players Association met earlier this week to address the issues of protests. But there was no resolution, and players will continue to express their sentiments on social issues as they choose.

Of course, the controversy  started last year with Colin Kaepernick’s decision to kneel during the national anthem.  Of course, you know the story from there.

Kaepernick has been whiteballed by the NFL’s predominantly white ownership, and he has been called a ‘son of a bitch’, by the ignorant, racist, who currently resides in the White House.  Kaepernick, whose decision to kneel was in protest of injustice, not in disrespect to the flag, has started a global movement.

Bennett adds until there is a serious discussion as to why Kaepernick is not in the league, there will be no resolution.

“I think the first step to even being able to even have a conversation is making sure that Colin Kaepernick gets an opportunity to play in the NFL,” Bennett said in an interview with ESPN.   “I think before we even negotiate anything about whether we sit, whether we stand [during the national anthem], it should be a negotiation about opening up the doors for Colin Kaepernick and giving him an opportunity again, because I feel like through everything, that’s been lost.”

Bennett went on to say that one of the ironic twists is that although Kaepernick was the catalyst of this issue coming to the forefront in the NFL, he no longer has a seat at the table. “All of us are having an opportunity to be able to speak to our employers, but to think about the guy [Kaepernick] who started everything not to be able to have a voice at this moment, it just doesn’t seem very right to me.”

The reason it doesn’t seem very right to Michael Bennett is because it isn’t right.  And what’s worse is everybody knows it.