Shahid Calls Out The Racist Antics Of The Current President 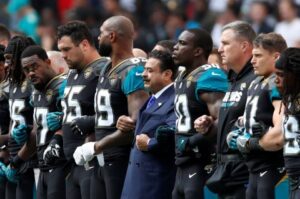 I guess it is really no surprise that if there was going to be an NFL owner to call out the ignorant racist who lives in the White House it would be Jacksonville Jaguars owner, Shahid Khan.

Khan, a muslim native of Pakistan, is the only non-white owner in the National Football League.  Khan called the racist president a ‘divider’, who is jealous of the NFL.  The racist once tried to buy the Buffalo Bills and he was rejected.

“Let’s get real,” said Khan. “The attacks on Muslims, the attacks on minorities, the attacks on Jews.  I think the NFL doesn’t even come close to that on the level of being offensive.  Here, it’s about money, or messing with — trying to soil a league or a brand that he’s jealous of.”

That is quite a change of opinion by Khan, who like several other NFL owners, actually made financial contributions to the racist president’s campaign.

Clearly, the racist president, has always wanted to be rich and famous.  History will remember him famously too, as the worst president ever.