Home College While The SEC Celebrates 50 Years Of Integration Of The Black Athlete (And Insane Profits), Opportunities Lack For Black Coaches

While The SEC Celebrates 50 Years Of Integration Of The Black Athlete (And Insane Profits), Opportunities Lack For Black Coaches 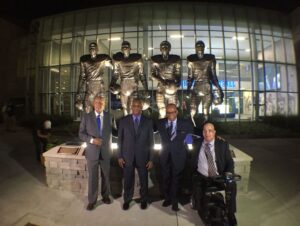 The University of Kentucky’s statue honors the black men who led the way for integration of the SEC 50 years ago.

When you think of SEC football the University of Kentucky is not the first team that will come to mind. Nor would they be the second team, or the third, or the fourth. In fact, there are those who will tell you in Lexington that football season is just a mere diversion until the start of basketball season. Of course, the mighty Kentucky Wildcats boast one of college basketball’s finest programs.

But oddly, enough, UK football is partly responsible for the dominance that SEC football has become.

In 1967 the Wildcats’ Nate Northington became the first African-American to play in the SEC.  Northington started what would become a wave of black athletes into the conference that has changed the dynamics of  not only southern football, but college football, drastically.

It no wonder the SEC is celebrating the 50th year of integration of the black athlete in football.  Northington and Greg Page were stars on the UK freshmen team in 1966 (freshmen did not play varsity at that time).  Tragically, Page died following a neck injury during a practice in August of 1967.  Northington officially became the first black to play in the SEC on Sept. 30, 1967.

The university erected a statue in honor of Northington, Page, and Wilbur Hackett and Houston Hogg, two black players who signed with the Wildcats in 1967, to capture the historical significance of these men.

“The seeds of change planted by these men and so many others have blossomed today into hundreds of opportunities in every SEC sport and in the academic programs of our universities,” said Greg Sankey, the SEC commissioner . “Those who endured in the early moments of change serve as reminders of our mutual responsibility to support opportunities for today’s young people, make certain we foster their education and graduation, and bring together our communities through our universities and athletics programs.”

What Sankey didn’t speak to was the enormous amount of money black athletes have generated for the SEC, and college football around the country.  And, he didn’t mentioned the incredible loss the HBCUs suffered, losing talent to bigger white schools. This isn’t to blame the white schools for that problem.  The Black colleges have not been able to sell enough top flight black athletes on its virtues.  The allure of  playing on national television in 100,000 seat stadiums, with first class facilities, and other perks, (some legal, and some not) have been too much for Black Colleges to 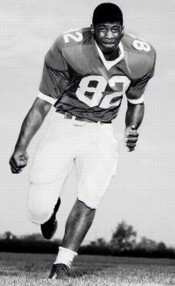 Now, when you consider how SEC schools have prospered with the influx of black athletes, it is important to remember that they didn’t even want them on the field, or in their schools.

Alabama Gov. George Wallace stood in front of the University of Alabama registrar’s office in 1963, and claimed that no black would ever attend the school:  “Segregation now, segregation tomorrow. segregation forever.”  (When you look at the vidoe link notice how excitedly all those white people clapped. Does that remind you of the reaction that many of the current president’s racially charged speeches get today?)

However, because of  some very brave  men, women and children, black, white and brown, Wallace, and his racist following, failed. Without the courage of the civil rights warriors, the young black men you watch playing in the SEC today would have been playing at schools like Alabama State, Jackson State (Miss.), Tennessee State University, or some of the other HBCUs like Southern University,  Florida A&M or Grambling.

The ramifications of these top  black athletes attending schools like Alabama, Auburn, and all the other SEC schools, have weakened the HBCU programs. The HBCU’s once rich talent pool that produced Hall of Famers such as Walter Payton,  Jerry Rice, Bob Hayes,  Michael Strahan, and many more, have been drained by the major white schools, and mid-major white schools.

It is important to note the story of Northington and Page at Kentucky in 1967, because it is often lost in the shadows of what took place in Legion Field in Birmingham, Ala., in 1970.

That’s when Southern Cal brought their integrated football team featuring a black quarterback, and a black running back, Sam Cunningham, to town to play Paul ‘Bear’ Bryant’s Alabama Crimson Tide in the first integrated college football game in the state. The Trojans, led by the bruising running of Cunningham, ran all over the Tide, 42-21. 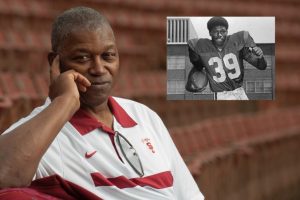 Don’t get me wrong, SEC football was always a great show, even before integration. However, it is no coincidence the game has skyrocketed in popularity and profit with the influx of the black athlete.

However, while black athletes have impacted the SEC, and college football and basketball, enormously, the opportunities to be involved in coaching and administration position continue to wane. Currently, there are only 14 black head coaches in FBS football. Ironically, the best opportunity for a black kid to one day become a head coach is at one of the HBCU conferences (MEAC, SWAC, on the FCS level) and (SIAC, CIAA on the Division II level). The irony here is those are the same schools many black athletes are turning down to go play at the bigger predominantly white schools.

Moreover, it seems that there is no change in sight.

“College Sport, which has had difficulty increasing opportunities for women and people of color, faced further challenges in this reporting period as it experienced decreases in both gender and racial hiring,” said Dr. Richard Lapchick, the Director of The Institute for Diversity and Ethics in Sports (TIDES).   “College sport still had the lowest grade for racial hiring practices and gender hiring practices among all of the college and professional sports covered by the respective Racial and Gender Report Cards.”

Let me be clear, desegregation was the thing to do.  After all, black people should have always been afforded the right to live in an equitable society. That said,
black folk have paid a heavy price in many ways in the struggle for freedom. The rise of the SEC, and the demise of premier football at HBCUs is just one portion of that payment.