The Master Showman: Pistol Pete Was The NBA’s Soul Man 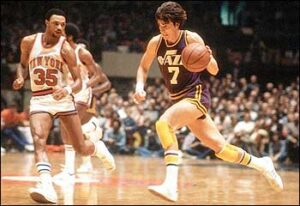 Pete Maravich’s brilliant play-making earned him a spot in the basketball Hall of Fame.

However, few will disagree that there was ever a showman quite  like Pistol Pete Maravich,  arguably the most entertaining player in the history of the game.

Maravich was selected by the Atlanta Hawks with the No. 3 overall pick in the 1970 NBA  draft out of LSU, where he averaged an NCAA record 44 points per game for his career. If you were to factor in the 3-point line that was not in existence at that time, he would’ve easily averaged 50-plus points per game.

Maravich  averaged 24 points per game during his 10-year career, which included stops with the Jazz, and his final season with the Celtics. The 6-foot-5 guard was a brilliant showman, who Magic Johnson credits as having a big influence on his game as a kid.

Maravich  could make circus shots, breathtaking passes, and his ball handling skills were magnificent.  He was a player you have to see in order to believe. Check out his highlights.