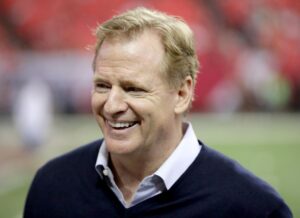 If  you want to see somebody duck and dodge questions, and stretch the truth, check out the interview with NFL commissioner Roger Goodell, who appeared recently on ‘First Things First’ on Fox Sports 1, hosted by NFL hall of famer Cris Carter, and Nick Wright.

Goodell knows damn well Kaepernick warrants an NFL roster spot, considering 25 other quarterbacks, none of which have the resume or accomplishments of the former 49ers quarterback, have been signed since he became a free agent.

Check out Goodell’s fibble explanation regarding Kaepernick, in addition to other issues of the NFL.