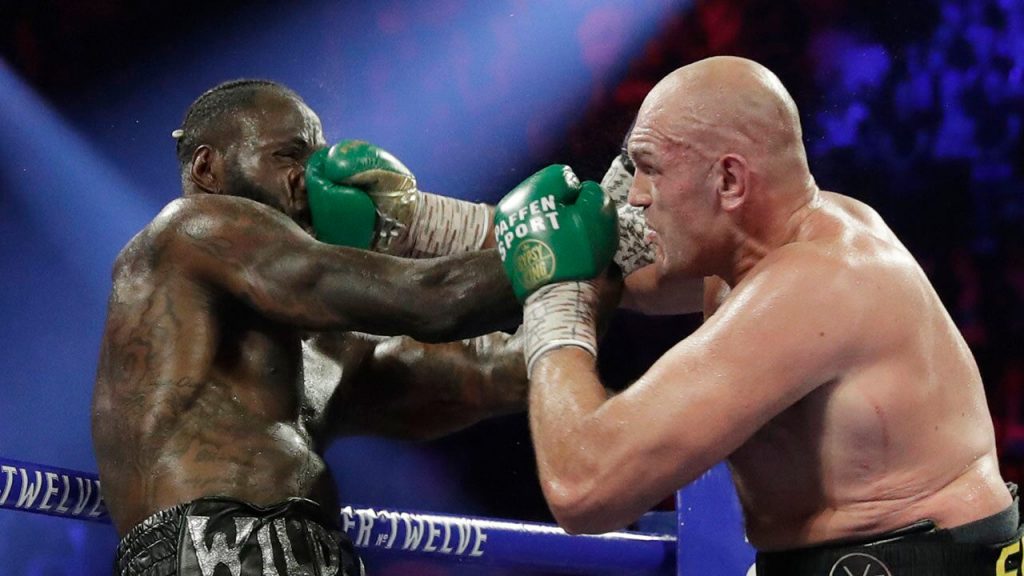 LAS VEGAS WIRE SERVICES — Tyson Fury reinvented himself once again, and once again he’s a heavyweight champion.
The Gypsy King dropped Deontay Wilder twice Saturday night in their heavyweight title rematch, turning from boxer to puncher to win the title when Wilder’s corner threw in the towel as he was taking a beating in the seventh round.
It was a stunning turnaround for a fighter who came back from drug and alcohol abuse to win the title for a second time, made even more surprising because Wilder was the devastating puncher in their first fight 14 months ago.

“The king has returned to his throne,” proclaimed Fury, who fought to a draw with Wilder in their first fight.
Fury dropped Wilder in the third round with a right hand that seemed to take the legs out of the champion. He put him down again in the fifth round, this time with a left hand to the body.

He also bloodied Wilder’s ear, and seemed to lick the blood off his shoulder in a bizarre scene in the sixth round. If that wasn’t enough fun for the night, he tried to lead the crowd in a singalong of “American Pie” after the fight. Fury knew all the words.

The end came at 1:39 of the seventh round when referee Kenny Bayless stopped the fight after Wilder’s corner threw in the towel as he was getting pummeled in a neutral corner. Blood was pouring out of Wilder’s ear for several rounds before Fury went in for the shoulder lick.

It was the first loss for Wilder in 44 fights, and it came in the 11th defense of the title he won in 2015.
“Even the greatest have lost and come back,″ Wilder said. “I make no excuses. This is what big-time boxing is all about.″

The two fighters are under contract for a third fight, though Wilder could opt out of it as the loser. If the fight happens, Fury would get the better part of a 60-40 purse bid.
Fury stalked Wilder almost from the opening bell, using his jab to control the early rounds. He won every round on the scorecard of the Associated Press and was in total command of the fight when it ended.

Wilder briefly protested the stoppage, as a pro-Fury crowd of 15,816 at the MGM Grand hotel roared in delight. The highly anticipated fight drew a heavyweight record $16.9 million gate and promoters believe it sold well on pay-per-view, too.

“I wish my corner would have let me go out on my shield,” Wilder said. “He did what he did. There’s no excuses.’’
Wilder, who at 6-foot-7 and 231 pounds was the smaller man in the ring to the 6-foot-9 British giant, was backpedaling the entire fight, trying to catch Fury coming in with a right hand. But he was never able to throw it effectively, and unable to deal with Fury’s jab either.

Two judges had Fury winning every round, while the third gave Wilder one round. Fury had a point deducted for grabbing and pushing in the fifth round.

“He manned up and he really did show the heart of a champion,″ Fury said. “He’s a warrior, he will be back, he will be a champion again. But the king has returned.”

Fury had bulked up to 273 pounds for the rematch, vowing to change tactics and become the big puncher. He was true to his word, dominating early with a jab that stopped Wilder in his tracks and then landing combinations to the head and body.

Fury (30-0-1, 21 KO) came into the ring carried aloft on a throne with a crown on his head. Then he showed he was really the Gypsy King as he made it an easy night against a fighter who had gone 12 years without losing as a pro.

For Wilder, it was a stunning end to an unbeaten mark that had seen him knock out 41 of his previous 43 opponents. But his devastating right hand was never a factor, and Fury seemed to walk through it. That was unlike the first fight 14 months ago when Wilder knocked Fury down twice on his way to a draw.
Both fighters were guaranteed $5 million in the rematch but could make $40 million apiece