Home College Will The Latest Scandal Finally Expose The Hypocrisy Of The NCAA?

Will The Latest Scandal Finally Expose The Hypocrisy Of The NCAA? 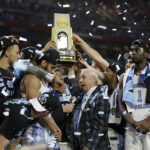 Many big time NCAA coaches like Roy Williams earn millions coaching young men who can have their careers ruined for accepting a few dollars.

This will surely be the scandal that changes everything, right?

It’s got to. When you have four of the Top 5 and eight of the Top 10 basketball programs implicated in a corruption case that involves the FBI and shows what looks like widespread NCAA violations.

At the root of it is kids — former and current stars (and sometimes family member) — benefiting from their uncommon abilities by way of impermissible benefits like money, accommodations, free air travel and meals. It’s written in ledgers. It’s heard on wiretaps. It’s ratted out by witnesses. Coaches or go betweens serving as conduits for payment to players from agents and shoe company executives. Could it get any worse than the Feds picking up phone conversations between Sean Miller, the Arizona men’s basketball coach, Sean Miller, and sports agent Christian Dawkins discussed a $100,000 payment to ensure star freshman Deandre Ayton signed with the Wildcats?

“These allegations, if true, point to systematic failures that must be fixed and fixed now if we want college sports in America,” Mark Emmert, NCAA president, said Friday in a statement. Emmert’s shock, if true, point to someone who needs to get out more. This, too, may surprise Emmert: As sure as the sun rises in the east and sets in the west, there can be no more denying that this whole amateurism narrative relative to college athletics is a sham. Consider this the February Fever before March Madness.

It was oh so predictable. Everybody sees the exploding coffers at the expense of the guys doing all the work being expected to be satisfied with a college education, a stipend and the honor of wearing that school’s jersey.

The inequity of the obscene revenue being generated versus money and benefits to the kids — both on top of and under the table — aren’t remotely close. Somebody’s getting in and you know who that is. Hint: they are not the ones sweating through summer workout, hours in gyms and weight rooms and risking life and limb for their schools.

The NCAA is in the midst of a 12-year College Football Playoff contract that pays it $7 billion. And March Madness is even more maddening with its 14-year television and online deal with CBS and Turner Sports that is worth almost $11 billion. Those deals combined are $18 billion — that’s 18 thousand million dollars for this 501 (c) (3) organization — alone. And some kid in this latest scandal is in trouble for taking a $10,000 loan.

How do you fix it? Options abound. But for the sake of rattling the cages of those who think free school is enough, how about taking free school off the table? Pay the kids. But not just a scholarship, room, board and stipend. Go the whole boat.

Each college provide each recruit with a cost sheet. For all that above, plus use of training facilities, medical staff, everything else folks consider “free” that athletes have at their disposal. Then I’d like to see a recruit get three estimates from colleges and sign their scholarship based on the best deal. Since college is supposed to prepare kids for their life’s work, they get a head start on negotiating skills and finance right there.

This thing looks to get a lot worse as time goes on, and more names and institutions are discovered. And that’s a good thing. Clearly a massive correction in how the NCAA does business is in the offing and it’s about time.